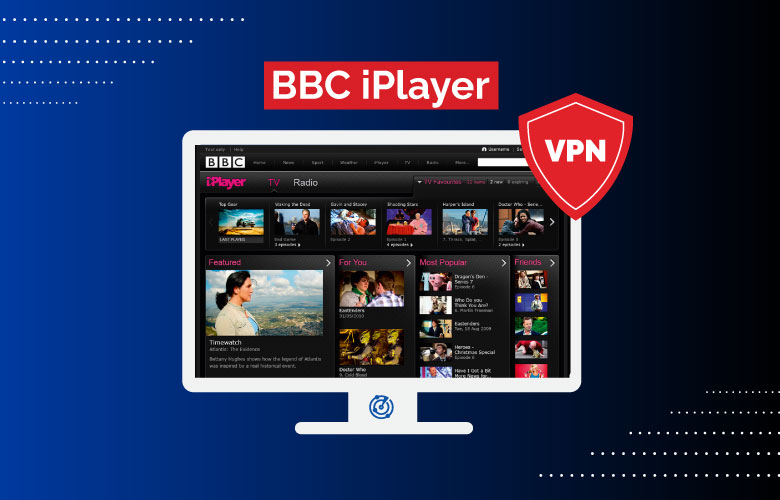 BBC iPlayer is the home of streaming and lots of catch-up TV from all of BBC’s channels, including BBC One, BBC Two, BBC Three, BBC Four, BBC News, kids TV, and even radio stations.

Shows include everything from live sports to award-winning series’ like Peaky Blinders, and it’s free-to-air with no ads for any UK resident. For everyone else, a VPN is the best way to access the streaming service in its native form.
To save you time, we’ve compiled a list of the best BBC iPlayer VPN providers in 2023.

NordVPN will have your back if you’re looking for a capable provider that can unblock streaming services like BBC iPlayer along with many others like Netflix. With nearly 5,500 servers across 60 countries and over 440 in the UK alone, you have plenty of chances to connect to iPlayer. They even offer Double VPN, Onion Over VPN, and obfuscated servers if you’re hoping for additional privacy options.

They note that, “BBC iPlayer is currently accessible on all devices with NordVPN’s UK servers.” That was certainly true during testing, and they offer a 30-day money-back guarantee for all subscriptions just in case.

To find out more, check out our extensive NordVPN Review.

CyberGhost makes it even easier to unblock BBC iPlayer, with a Streaming tab containing a list of popular sites it can access. (It’ll even open iPlayer in your browser for you.)

They have over 680 servers that are physically located in the UK region, and they can also be used for P2P file sharing, which makes CyberGhost one of the best VPNs for torrenting. Their network makes use of over 7,900 servers overall, so you’ll never run out of IP addresses, and it’s unlikely to be overloaded.

Read our CyberGhost VPN review to find out more about its subscriptions and features.

BBC iPlayer can be accessed with ExpressVPN, which is one of the best in the business if you’re solely aiming to unblock the widest range of UK streaming services. They have 6 server locations in the region, coupled with 24/7 live chat support and a range of additional features.

ExpressVPN is slightly more expensive than the norm, but it’s still a decent value for the money when you consider it unblocks almost any streaming service without breaking a sweat. Speeds are capable as well, and security is airtight.

Is it worth the outlay? Check out our ExpressVPN review to find out what we think.

Surfshark is a viable option for BBC iPlayer. They also happen to offer some of the cheapest VPN package prices available – especially when put up against premium competitors such as NordVPN and CyberGhost seen above.

Their British VPN servers are based in London, Manchester, and Glasgow spread across both England and Scotland. Surfshark is based in the British Virgin Islands, which is one of the safest jurisdictions for a VPN company to avoid potential privacy issues. (There’s no relation to the UK government despite the name, and the territory has its own data laws.)

For streaming, Surfshark works with Netflix to unblock content across multiple regions. To learn about Surfshark’s streaming capabilities and features, check out our Surfshark VPN Review.

Private Internet Access (PIA) is another solid VPN if you’re hoping to unlock the BBC iPlayer website from anywhere in the world. If you’re looking for streaming support, PIA is also able to provide access to the following Netflix libraries:

They have a trio of server locations in the UK that are perfect for iPlayer which can be found in Southampton, Manchester, and London. It’s just a small part of their vast server network covering 35,000+ servers across 78 countries.

1. Can I watch BBC iPlayer from anywhere in the world with a VPN?

Yes. A VPN will allow the user to spoof their location, which makes it easier to bypass content locks as they’ll be assigned with a new IP address. (This gives the appearance that you’re connecting to the site or the app via the UK.)

2. Are all programs that are broadcast on UK channels available on BBC iPlayer?

According to BBC iPlayer, no. They state that they “can’t always acquire BBC iPlayer rights for every program [they] broadcast. This is sometimes due to the cost involved in acquiring licenses from third parties or maybe for other legal or contractual reasons. Sometimes [they’re] only able to acquire the rights to stream a program, but not to download it.”

3. My VPN isn’t working with BBC iPlayer. Are there any solutions?

A free provider is unlikely to have UK servers that haven’t been blocked by the BBC already, while many place caps on connection speeds or the amount of data that can be used. In other words, it’s going to be challenging to find a free VPN that will be able to unblock the iPlayer website, and stream content with no lag.

If you’re planning to watch shows from abroad or while on holiday, we’d advise using a premium VPN to do so. The BBC would prefer if you download the programs while you’re still in the UK and connected to the internet.

5. What can I find on BBC iPlayer?

BBC iPlayer is best known for catch-up services, but you’ll also be able to access several live channels, too. This includes their flagship options in the form of BBC One and BBC Two, news, kids TV, and even BBC radio stations, along with much more. You’ll be able to find a TV guide for iPlayer directly on their website.

6. Do you need to sign in to watch BBC iPlayer with a VPN?

You will need to make an account and sign in to stream BBC iPlayer content. They may ask for a UK postcode when you sign up, and you’ll be prompted to confirm that you have a TV license.

The BBC’s stated mission is “to act in the public interest” by providing “impartial, high-quality and distinctive” content, which will “inform, educate and entertain” everyone who pays a yearly license fee in the UK. They note:

“Money raised from the license fee pays for BBC shows and services – including TV, radio, the BBC website, podcasts, iPlayer, and apps. Almost £3.7bn was raised by the license fee in 2019, accounting for about 76% of the BBC’s total income of £4.9bn.”

That’s how iPlayer is free-to-air with no adverts for UK users. Best VPNs for Streaming in January 2023

Best VPNs for Torrenting in 2023 VPN Features You Need for Streaming in 2023

You can use PayPal to pay or get paid and send or receive money worldwide....

There are plenty of horror streaming sites out there to choose from, but...

I’m not afraid to admit that binge-watching TV shows and movies is one...

Are you looking for The Pirate Bay proxy list to torrent in [current_year]?...